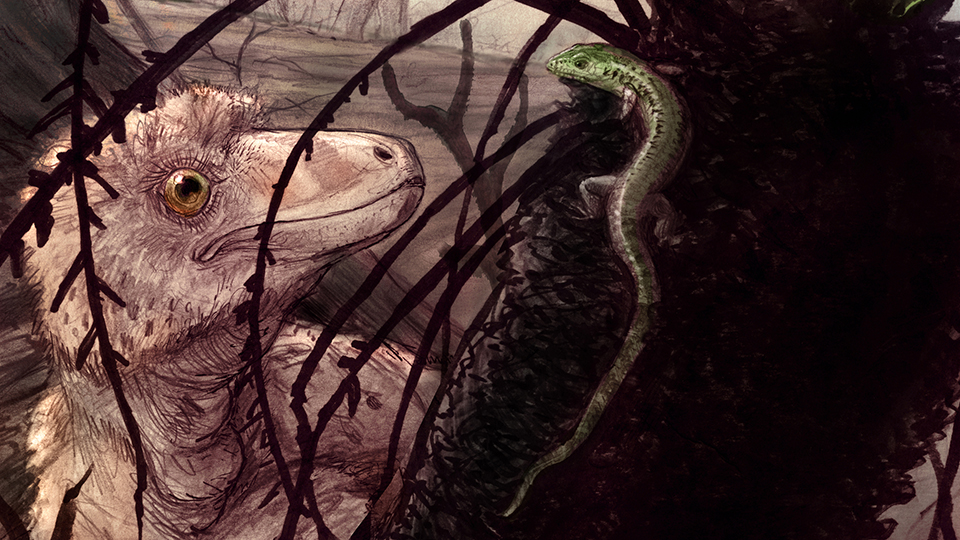 A new small fish, a species of lizard discovered by a research team that includes paleontologist UW Oshkosh

Two species that inhabited part of what is now the southern United States about 100 million years ago were discovered thanks to a research team that includes a paleontologist from the University of Wisconsin at Oshkosh.

Joseph Frederickson, vertebrate paleontologist and director of the Weis Earth Science Museum on the Fox Cities campus, is among the authors of a recent article published in PairJ highlighting these new discoveries in southwest Arkansas. The species is a small lizard named by researchers Sciroseps pawhuskai and a named fish Anomoeodus caddoi.

The paper is titled New Vertebrate Fauna from the Late Cretaceous Holly Creek Formation of the Trinity Group, Southwest Arkansas, USA. Celina Suarez, associate professor of geosciences at the University of Arkansas, was the lead author of the article, which brings together decades of research in the area known as the Holly Creek Formation. Frederickson is the second author.

“The Holly Creek Formation is interesting because few fossils have been described in the literature, although it has produced dinosaur fossils in the past,” said Frederickson. “Trainings like these help us better understand how the continent was connected and the diversity of living animals during the early Cretaceous.”

“The fish and the lizard represent a material, albeit small and fragmentary, that preserves enough detail to call them new species,” he said. “The lizard jaw is particularly interesting because normally the fossils are limited to small broken pieces, while the specimen we describe in this article is largely a complete lower jaw.”

His part of the Arkansas Project included the study of micro-fossils, or small materials that required microscopes to see in detail. This included the teeth of fish, amphibians, reptiles, and dinosaurs. He compared these fossils with those from rocks of similar age in Oklahoma, Montana and Maryland to determine which species were present, then photographed the material using a scanning electron microscope.

This latest publishing job comes a year after Frederickson made headlines for another published article. In 2020, he presented proof that Velociraptors probably didn’t hunt in large coordinated groups, as the famous jurassic park movie theater. This latest research, of course, focuses on creatures much less glamorous than the raptor immortalized by Hollywood.

“I think this article is a good reminder that the fossil record preserves many different animals, not just dinosaurs,” he said. “This article focuses heavily on the tiny organisms that crawl or swim at the feet of giant dinosaurs, which too often go undocumented because they can be difficult to study. However, it is often these small animals that tell us the most about the environment in which they lived.

The study is the result of long-term investigations that began in Arkansas in the 1970s. It is in this area that thousands of traces of sauropods and theropods have been discovered, starting in the 1980s.

Previously preserved dinosaurs from the site include at least one long-necked sauropod (probably Sauroposeidon), large theropods (a juvenile Acrocanthosaurus), an ankylosaur (armored dinosaur), and the little kickboxing raptor, Deinonychus.

A variety of very small fossils have also been discovered, including remains of sharks, bony fish, frogs, lizards, turtles, crocodilians and mammals. Although unspectacular, these tiny bones and teeth document the presence of many species essential to understanding the ecosystem that lived in Arkansas millions of years ago.

The remains have been preserved in the rock which represents a brackish to freshwater environment that was probably a swampy area just inland from the ancient coast.