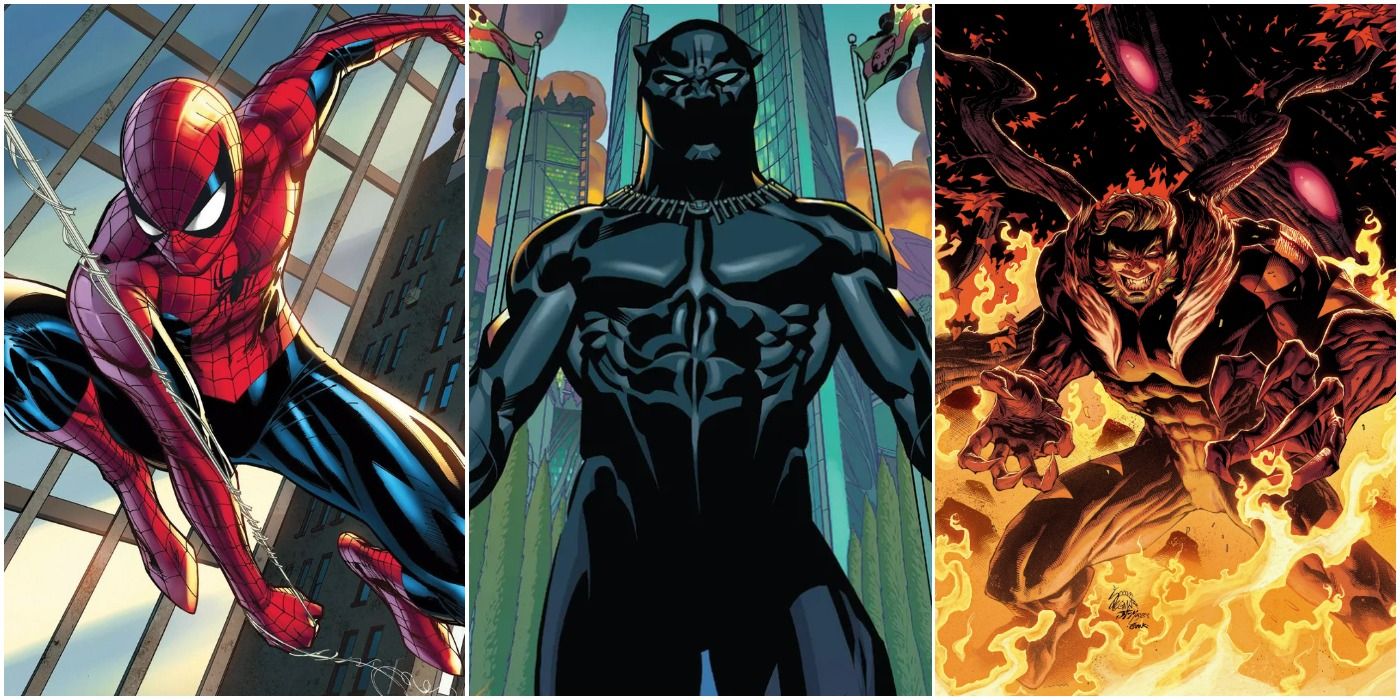 Since the early days of superhero comics, animal-based characters have been common. Whether it’s special animal-like abilities, an animal-inspired costume, or a philosophy that parallels the nature of a specific animal, superheroes and villains inspired by animals often make up unique and visually exciting characters. Like its larger competitors, Marvel is no slouch in the animal-inspired superhero department.

Over its eighty-year history, Marvel has produced some of the greatest animal heroes and villains in all of fiction. With legendary characters like Spider-Man, Wolverine, and Black Panther, Marvel Comics is a great way to experience animal-inspired human characters.

8 Spider-Man is one of Marvel’s greatest characters

Arguably the most successful Marvel character of all time, Spider-Man outgrew his cult-favorite status and went viral to much mainstream acclaim. With nine eponymous hit films, numerous appearances in the famous avengers movie franchise and several successful video games, just about everyone has seen or heard of Spider-Man at some point. First appeared in amazing fantasy #15, Spider-Man is a high school student from Queens who, while on a field trip to a science lab, is bitten by a radioactive spider. Shortly after being bitten, Peter gains spider-like powers, including the ability to stick to walls and increased agility.

7 Lockjaw is a super-powered dog

First appeared in The Fantastic Four #45, Lockjaw is a five foot, twelve hundred pound dog loyal to the Inhuman royal family. Born from inhuman canine science, Lockjaw was created after many experiments on his mother that resulted in his birth. Sharing his mother’s womb with four other dogs, Lockjaw used his teleportation abilities to teleport his siblings off-world, keeping them safe from further experimentation.

Close friends with Black Bolt, the leader of the Inhumans, Lockjaw is generally used as a means of transportation through time and space, allowing the Inhumans to go anywhere whenever they wish. In addition to teleportation, Lockjaw has incredible strength and superhuman levels of durability.

6 Wolverine is one of the most popular X-Men

Well known for his numerous appearances throughout the x-men film franchise, Wolverine is another Marvel character who has risen above cult status and become a mainstream star. First appeared in The Incredible Hulk #180, Wolverine debuted as an enemy of the Hulk, showing high-level combat abilities and almost matching the Hulk’s ability to do damage. Born in the 19th century, Wolverine fled his family after suddenly manifesting his mutant powers. After wandering the earth for nearly a hundred years, he volunteered for the Weapon-X program, which resulted in his skeleton being coated in a virtually unbreakable metal: adamantium. In Giant Size X-Men #1, less than a year after its debut in PontoonWolverine joined the X-Men and worked alongside other new team members like Storm, Colossus, and Nightcrawler.

5 The Lizard is one of Spider-Man’s oldest villains

Thanks to Marvel Studios guardians of the galaxy movies, Rocket Raccoon rose from the depths of relative obscurity and became one of Marvel’s most popular characters. First appeared in The Incredible Hulk #271, Rocket made his comic book debut as an ally of the Hulk. Nearly eleven years after his encounter with the Hulk, Rocket received a self-titled four-issue miniseries that focused on his adventures alongside other creatures from his home planet, Halfworld. In 2008, in the middle of the popular Marvel Annihilation event, Rocket Raccoon joined Starlord, Groot, Gamora, Drax the Destroyer, Phyla-Vell, and Adam Warlock to form an all-new roster of Guardians of the Galaxy.

3 Rhino is a former Russian gangster

Another well-known Spider-Man villain inspired by an animal, Rhino first appeared in amazing spider man #41. Initially a Russian mafia thug, Aleksei Sytsevich underwent a series of life-threatening treatments to give himself super strength. In the process, Aleksei’s skin molded into powerful armor inspired by the appearance of a rhinoceros, officially taking on the name “Rhino”.

In addition to his super-strength, Rhino has superhuman durability, incredible speed for his size, and seemingly unbreakable durability. While his status as a Spider-Man villain is indisputable, Rhino has had encounters with other Marvel heroes, like the Hulk, Dr. Strange, and The Thing.

After debuting in iron fist #14, Sabretooth has become Wolverine’s most personal rival. Growing up in the late 1800s, Victor Creed’s mutant powers first manifested at a dinner party with his family, where he accidentally killed his brother for a morsel of food. Later locked in the basement by his father, Victor’s father attempted to pull out his sharp teeth in hopes of purging his mutant abilities. Eventually breaking free from his father, Sabretooth later encountered an unconscious Wolverine at the center of a bloody crime scene. Assuming Wolverine was the killer he was tracking, Sabretooth brought him to the Ravencroft Institute, where doctors performed numerous experiments on him. Eventually healing himself from the experiences, Logan woke up and immediately took on Sabretooth, beginning one of Marvel’s greatest rivalries.

1 Black Panther is the King of Wakanda

Like Spider-Man and Wolverine, Black Panther recently joined the small cast of Marvel characters that almost everyone has heard of. With a live-action movie going viral in 2018, skeptical fans can no longer question Black Panther’s status as a Marvel A-lister. First appeared in The Fantastic Four #52, Black Panther got its start as an admirer of Reed Richards’ scientific work. Receiving an invitation to visit Wakanda in the form of a flying craft, The Fantastic Four accepts and arrives in Wakanda shortly after. After leaving the ship, the Fantastic Four are suddenly trapped in what appears to be an ambush by Black Panther and his guards. After a short skirmish, Black Panther reveals that he was just testing their fighting abilities and welcomes them to Wakanda.

Jared is a writer and gamer based in Long Island, New York. He has worked as a video content creator and editor in the past, making video game videos for youtube, and now works as a list editor for CBR. Jared graduated from Rutgers University in May 2020, where he studied filmmaking and creative writing. In his spare time, Jared enjoys playing basketball and watching movies.

Lost or extinct: the status of more than 500 species remains unknown