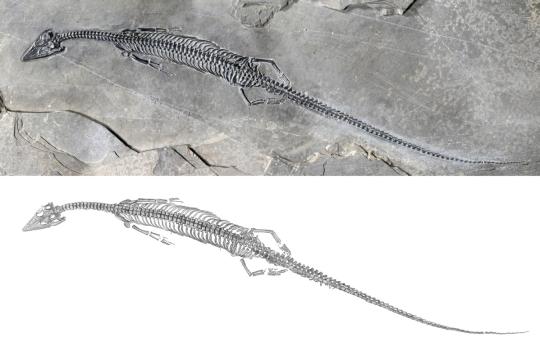 In the reptile world, tail size matters. Some species use their long tails for balance, such as the Asiatic lizard and green basilisk, while marine reptiles use their tails for propulsion and maneuverability.

Earlier this month, Chinese scientists reported the discovery of a complete fossil skeleton of a new species of marine reptile in Yunnan province that roamed the ancient sea around 244 million years ago during the Triassic period.

The prehistoric creature was called Honghesaurus longicaudalis and had the longest tail of any known pachypleurosaur. It is also the oldest fossil trace in China of this family of reptiles.

Pachypleurosaurs are a group of small to medium-sized lizard-like marine reptiles of the Early to Middle Triassic. The fossil is 47.1 centimeters long and its tail extends more than half the length of its body at 25.4 cm.

Remarkably, the tail of the discovered reptile contains 69 vertebrae, far more than any other known pachypleurosaur, which typically has no more than 58. In comparison, humans have only 33 vertebrae.

Scientists believe that its long body paired with a long tail could have provided it with good energy efficiency and maneuverability in water, making it an excellent swimmer, according to a study published in the journal Scientific Reports.

Xu Guanghui, a researcher at the Chinese Academy of Sciences’ Institute of Vertebrate Paleontology and Paleoanthropology, said when he first saw the Honghesaurus fossil, he was told he might act of another previously discovered reptile called Wumengosaurus.

But Xu was not convinced and decided to investigate. This led him to discover that the animal in the fossil was actually an evolutionary transition between two species of pachypleurosaurs, namely Qianxisaurus and Wumengosaurus.

As early as 1854, scientists had discovered fossils of Pachypleurosaurus in the Alps. The first named marine reptile discovered in China also belonged to this family. It was called Keichousaurus and was discovered by the famous Chinese paleontologist Hu Chengzhi in 1957.

Pachypleurosaurs are considered the basal members of the superorder Sauropterygia, which includes the plesiosaurs, a large, long-necked marine reptile that ruled the Jurassic seas and has made frequent appearances in myth and popular culture.