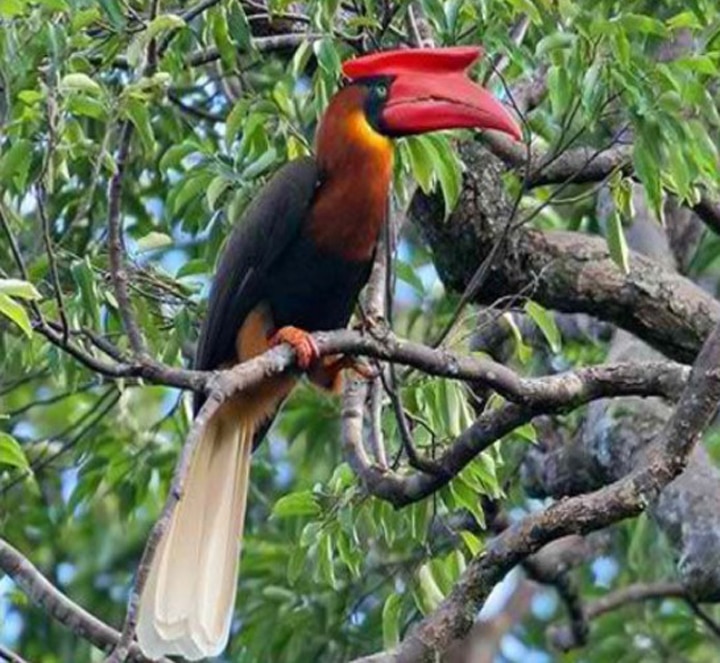 At least 10 Philippine species were believed to have been severely affected by Typhoon Odette (international name Rai) which devastated the Visayas and Mindanao last December, an official with the Department of Environment and Natural Resources (DENR) has said.

Natividad Y. Bernardino, OCI Director of DENR’s Bureau of Biodiversity Management (BMB), said that despite the lack of exact figures on the extent of the damage, “Typhoon Odette undeniably caused severe damage to wildlife and their habitats.

Odette has seriously affected the protected landscape and seascape of Siargao Island.

Asked by email, Natividad said that while the DENR-BMB is assessing the damage caused by the typhoon to all affected areas, she noted that it is obvious that it caused serious destruction not only in protected areas, but also to other important ecosystems in the Visayas and Mindanao.

“Important wildlife species and ecosystems are monitored by the DENR and its conservation partners. But due to limited resources, no in-depth research or study has yet been conducted in the country regarding the impact of natural disasters on ecosystems and wildlife,” she explained.

“Ultimately, just like humans, other living organisms, including wildlife, are particularly vulnerable to natural disasters,” she said.

Threatened endemics that have been seen affected by Odette in the Visayas and Mindanao include the Philippine tarsier, one of the world’s smallest primates; bird species, such as the Mindanao hornbill, southern rufous hornbill, twisted hornbill, Camiguin hanging parrot, and reptile species including the Philippine crocodile and sailfish lizard.

Natividad said flying foxes, such as the golden-crowned flying fox and the giant fruit bat, also fear they were badly hit by the devastating typhoon.

It was reported on television news a few days after the typhoon that some residents did not see tarsiers on trees where they used to roost.

The endemic species affected by Odette are considered important because of their uniqueness and the ecosystem function they provide.

The Philippine tarsier is one of the tourist attractions in Bohol, the site of the famous Chocolate Hills.

The Mindanao hornbill, southern rufous hornbill and twisted hornbill are endangered species, along with the Camiguin hanging parrot, as their populations in the wild decline due to habitat loss, hunting and poaching.

The Philippine crocodile, specifically the Crocodylus mindorensis, is endemic to the Philippines. It is also on the brink of extinction due to habitat loss and hunting.

The population of the sailfin lizard is declining for the same reasons. They are hunted by illegal wildlife traders for the multi-billion peso illegal pet trade.

Natividad said protected areas and the wildlife they host are vulnerable to natural calamities or extreme weather events.

Natural disasters are considered serious and detrimental threats to the biodiversity of the country’s protected areas due to the damage they can cause to the important and unique ecosystems and wildlife in these areas.

The DENR-BMB, she said, has been actively involved in carrying out assessments in affected protected areas after the occurrence of devastating natural calamities to determine the extent of damage to its ecosystem, species of flora and fauna and the communities that depend on them.

Monitoring activities of DENR and BMB

“A notable initiative by DENR-BMB in the assessment of a protected area after a natural calamity was when a destructive phreatomagmatic eruption of Taal Volcano in January 2020 significantly damaged much of the protected landscape of Taal Volcano,” said she declared.

“Unfortunately, the assessment activity was interrupted when the Covid-19 pandemic hit the country in early 2020 [starting in March]“, she pointed out.

Natividad said the DENR-BMB had been involved in similar activities before.

After the onslaught of Typhoon Ulysses (international name Vamco) in the latter part of 2020, she said, the Department of Environment created a composite team represented by DENR Calabarzon, Bicol Region, Central of Luzon and the regional offices of the Bureau of Mines and Geosciences, Environment Bureau of Management and the DOST-BMB to monitor, evaluate and recommend appropriate measures to be taken for the restoration of the legislated and proclaimed protected areas affected in Cagayan, Marikina and the basin of the Bicol river.

“DENR’s initiatives are consistent with the issuance of Executive Order 120, or ‘Strengthening Rehabilitation and Recovery Efforts in Typhoon Affected Areas through the Establishment of a Task Force for Better Reconstruction,'” she declared.

The DENR, she said, focuses on key areas that focus on intensified water management.

The objective is mainly focused on improving the existing forest cover, recovering easements and stabilizing the banks, setting up a series of control dams and gabions, intensifying forest protection, a-t she noted.